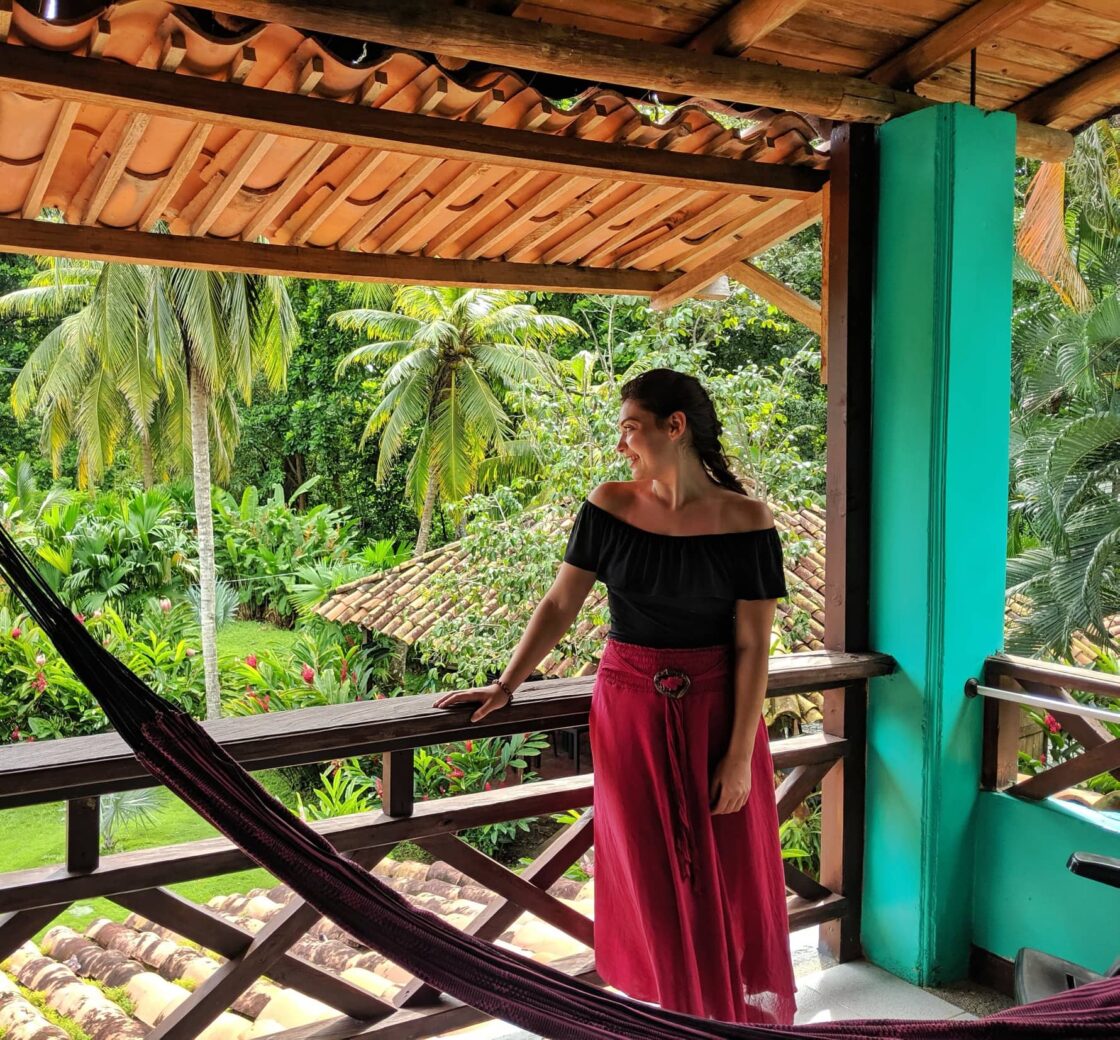 Medellin: From the most dangerous city in the world, to your next travel destination

When most people think of Colombia, the first things that come to mind are coffee, cocaine, and Sofia Vergara. And although Colombia is quite famous for all these things, many people fail to look past them and see what a beautiful, amazing country it is, filled with stunning landscapes, friendly people, a fascinating history and an impressive art culture.

I decided to move to Colombia a few months ago, for many reasons: improve my Spanish, go salsa dancing, travel the gorgeous country, but also because I was curious. Many people are afraid of places like Colombia for its reputation and history of violence, which I will not deny existed; however, after some research and speaking to people who explained the tremendous improvements and turn around the country experienced, I couldn't help but want to see it for myself, to make my own opinion. So I packed by bags, booked a flight, and moved to one of the cities everyone boasted about: Medellín.

Historically, Medellín was ranked one of (if not THE) most dangerous cities in the world for its high murder rates, caused by organized crime and guerrilla groups who wreaked havoc among the people. After efforts from the government, some foreign aid in combatting these issues and the people themselves who wanted a better life, the city has pivoted and is now considered the "Silicon Valley" of South America! Next time you are looking at booking a trip to an unconventional travel destination, consider Medellín for these top reasons.

COST
Your biggest expense on this trip will be without a doubt your flight, but once you land in Colombia, everything is quite cheap relative to the dollar. The Menú Del Día, which translates to "daily menu" is a popular lunch option where you are given a non-alcoholic drink, soup, and meal of the day (sometimes even a dessert) for around $4.50 ($12,000-15,000 Colombian pesos). Sometimes they are so filling you won't even be hungry for dinner! 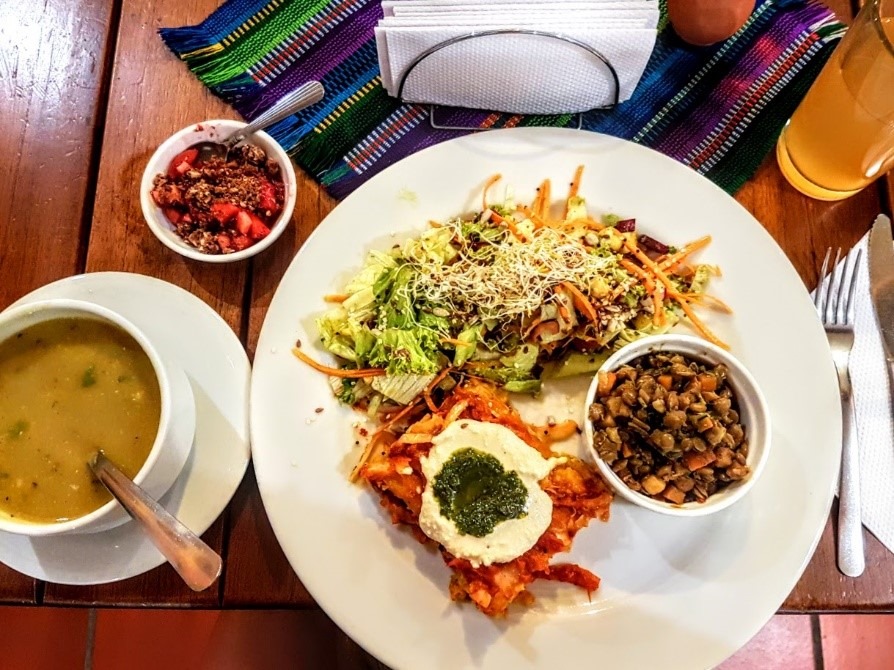 I recommend you stay in El Poblado, the nicest neighbourhood in Medellin. Parque Lleras, located in the heart of Poblado, is well known for its variety and quality of restaurants, boutique shops, and night life.

Rooms in the most expensive hotels cost around $95/night if you are feeling bougie, however in my opinion the best option is Airbnb, where you can find gorgeous modern apartments ranging from $30-60/night! 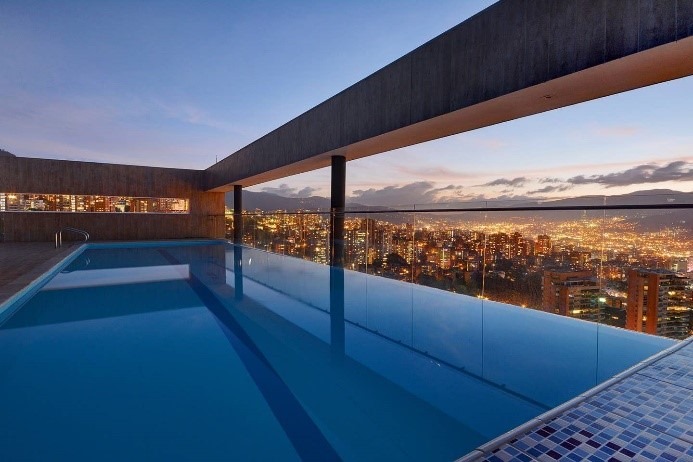 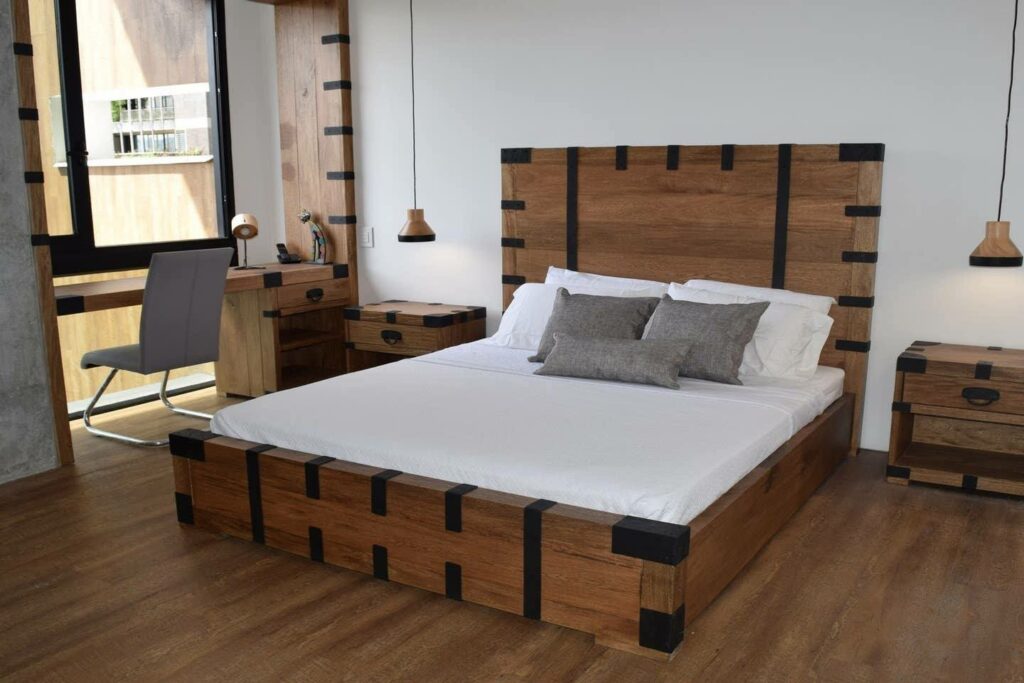 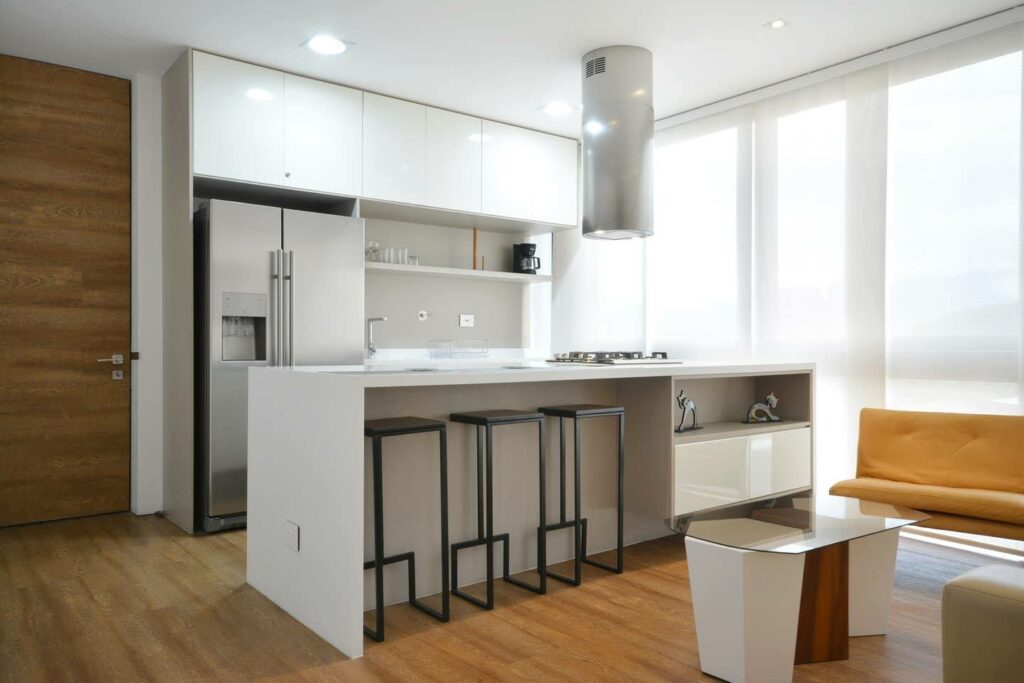 TAKE A DANCE CLASS AT DANCE FREE
It is well known that in many Latin American countries, dancing is a big part of the culture. Although the city of Cali in Colombia is known as the salsa capital, you can find many places to go dancing in Medellín, including a variety of fun group classes to help you learn!

You can take drop-in classes at Dancefree, a dance school located in El Poblado that offers nightly dance classes with a cover charge of $10,000 pesos (around $4 USD). They offer different classes of bachata or salsa starting at 8:00 PM almost every night, simply look on their website to see what class is offered on what day and show up ready to learn! You will find a mixture of Colombians and foreigners, as well as different levels of dancers all wanting to pick up some new dancing skills.

TAKE A DAY TRIP TO GUATAPÉ
Guatapé is a little town about two hours from Medellín, and is considered one of the prettiest towns in all of Colombia, and dubbed the most colourful.

The town itself is filled with cute little shops, cafes, restaurants and is painted in bright colours with gorgeous carvings on all the buildings. There are no cars that go into the main part of the town, so if you need a break from walking you can hail one of the tuck-tucks that act as a taxi service. 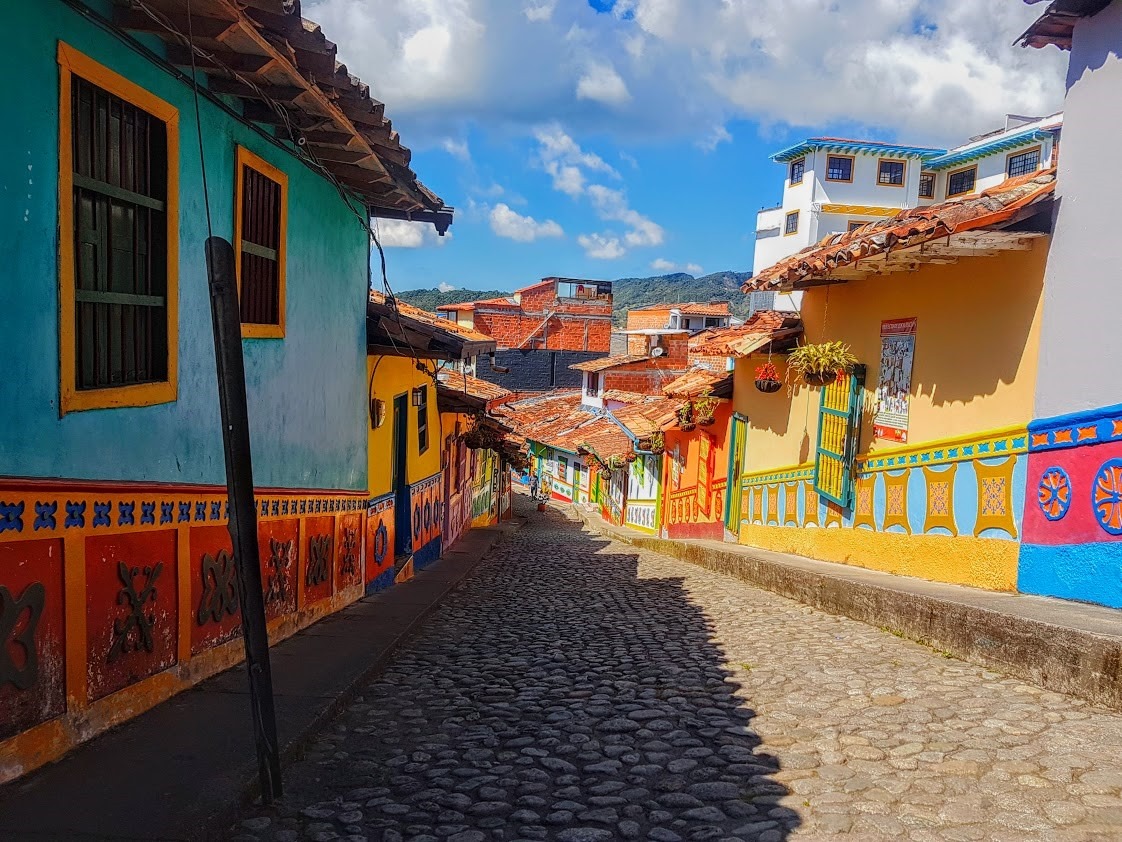 The colourful streets of Guatapé

Not to mention the dogs. If you like dogs as I do, you’re in luck. The town is filled with friendly pups who are living the doggy dream. They are all very well taken care of by the locals; they are fed, bathed, given shots, and neutered all thanks to a donation box in the centre where tourists can leave donations to help the locals care for them. You can opt to take a guided tour, which leaves from Parque Lleras in El Poblado, or venture off on your own, freeing you up to stay a night or two enjoying the many activities the area has to offer. 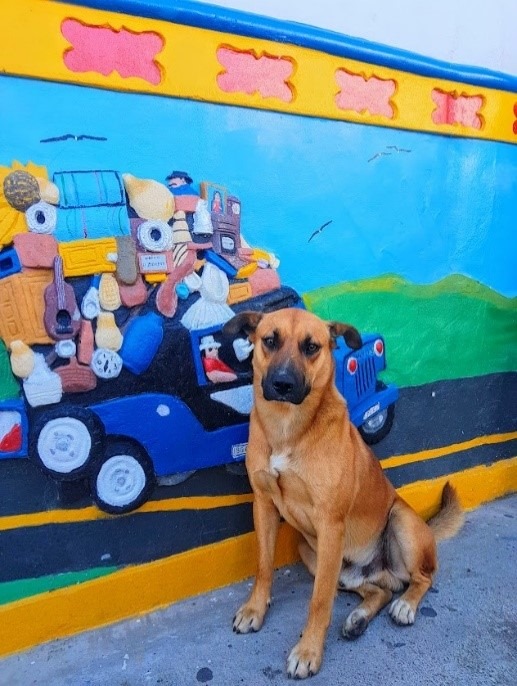 Just minutes away from the town of Guatapé, and also part of most day tours offered from Medellín, is the famous Piedra de Peñol. The Piedra is a massive rock which gives an amazing view of the man-made lakes, a result of the constriction a dam belonging to a hydroelectric power plant. The climb up the 740 steps to the top of the rock is worth it for the view. 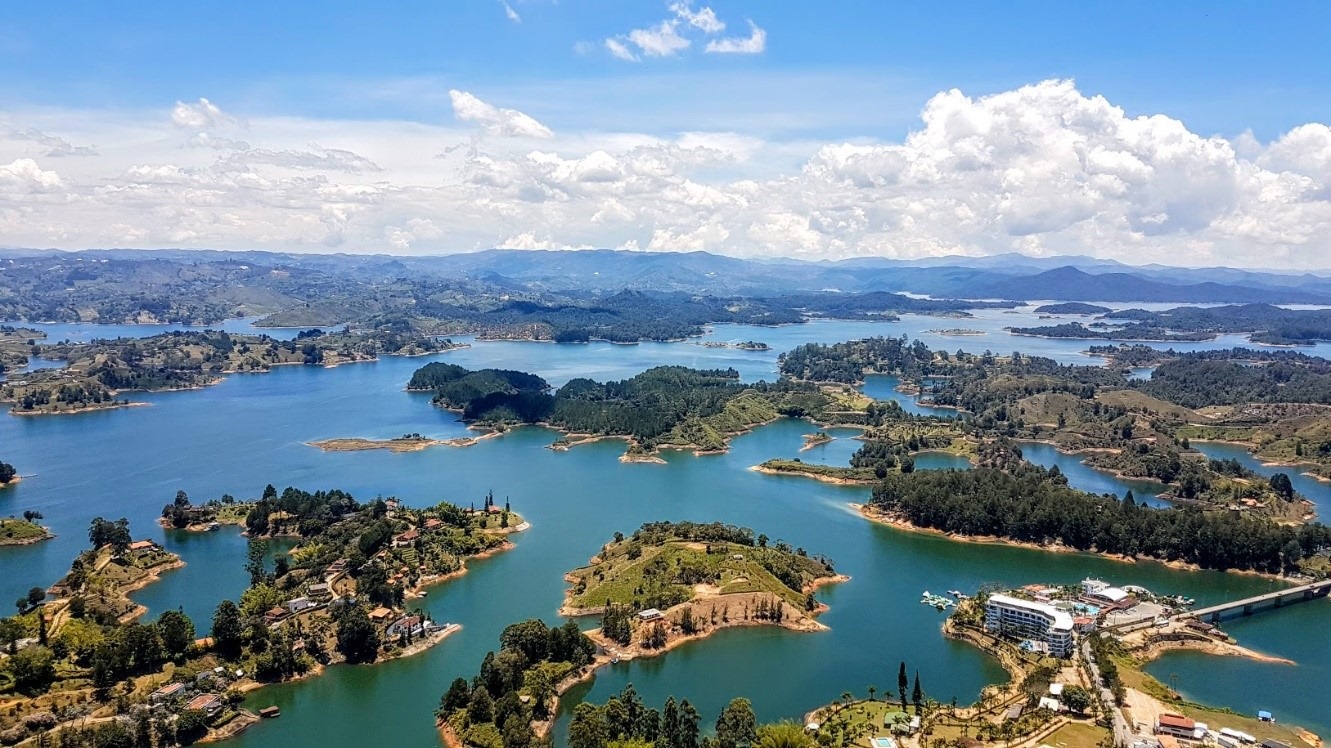 View of the lakes from the top of the Peñol

VISIT COMUNA 13
Previously the most dangerous neighbourhood in Medellin, take the trek up to this culturally and historically rich barrio, and learn about the violent history and how art, dance, and music has helped transform the area and give it a new life. They even have escalators to help make the neighbourhood more accessible for locals and tourists alike. You can head over and explore the area on your own, or opt for a “free” walking tour where you simply tip the guide at the end of the tour, around $20,000 pesos (about $8 USD) per person. 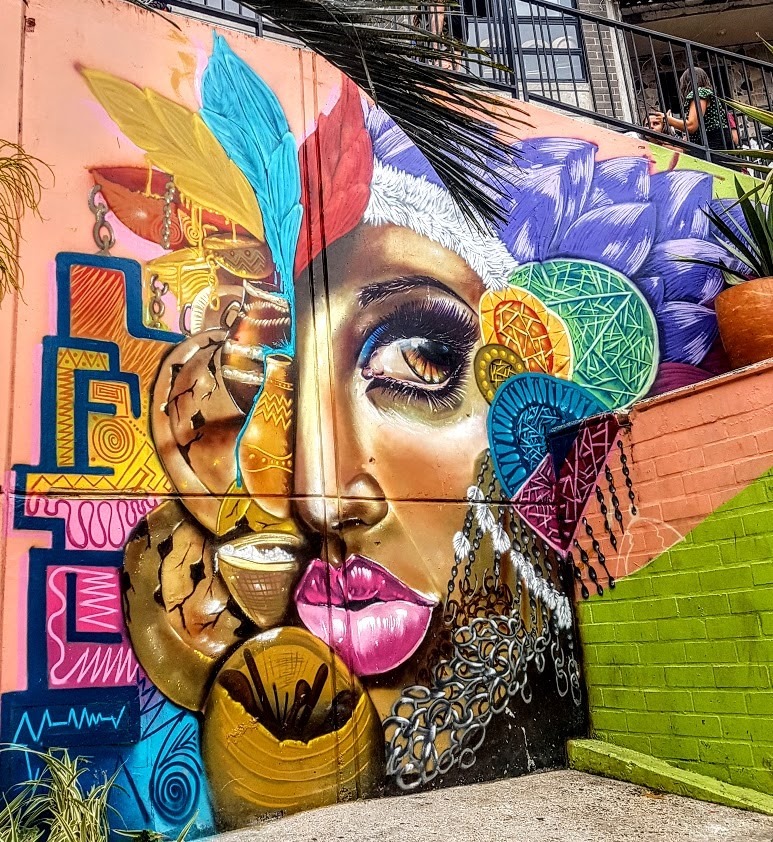 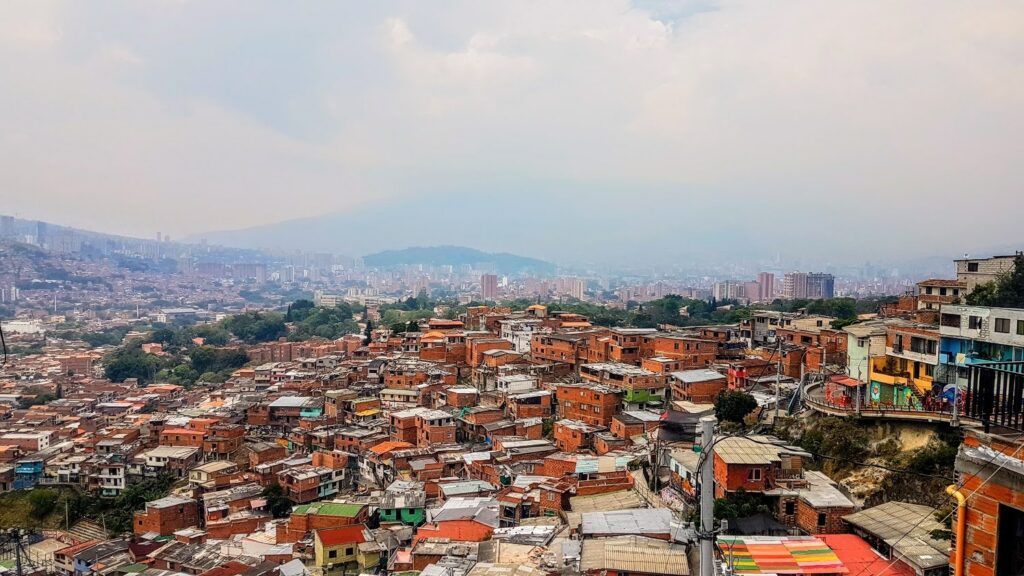 ENJOY THE VIEWS AT SOME OF MEDELLIN'S ROOFTOP BARS
Medellin is located in a valley, which is one of the reasons I love it here so much. You are surrounded by mountains, which make a gorgeous backdrop in during the day, and when night falls the twinkling lights of the city make it look like something out of a fairy-tale. Luckily, Medellin has a selection of roof-top bars, where you can grab a snack or a drink, and sit back to enjoy the amazing views the city has to offer, day or night!

One of the most famous of these roof-top hangouts is called Envy. Located in the trendy neighborhood of El Poblado, it is the perfect place to snap some photos that will make everyone on your Instagram jealous that they hadn’t thought to travel to Colombia first. 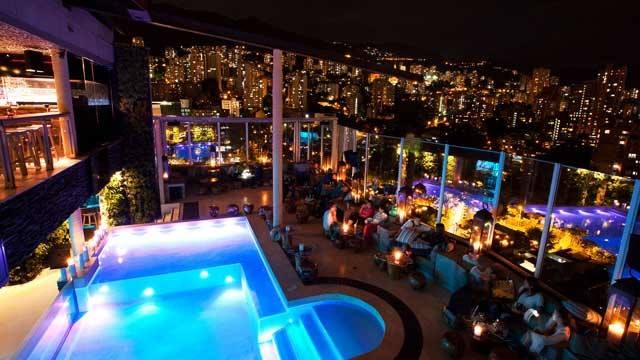 VISIT PARQUE ARVI
For those who like to get out of the city and breath some fresh air, there is an ecological nature preserve called Parque Arvi, just minutes up one of Medellin’s surrounding hills. You can go hiking, visit the local market, learn about the history and culture of the Aburra Valley, among many other activities! Getting there is part of the fun as well, as you can go by Medellin’s famous Metro system cable cars which allow for great views of the city as you take your journey. 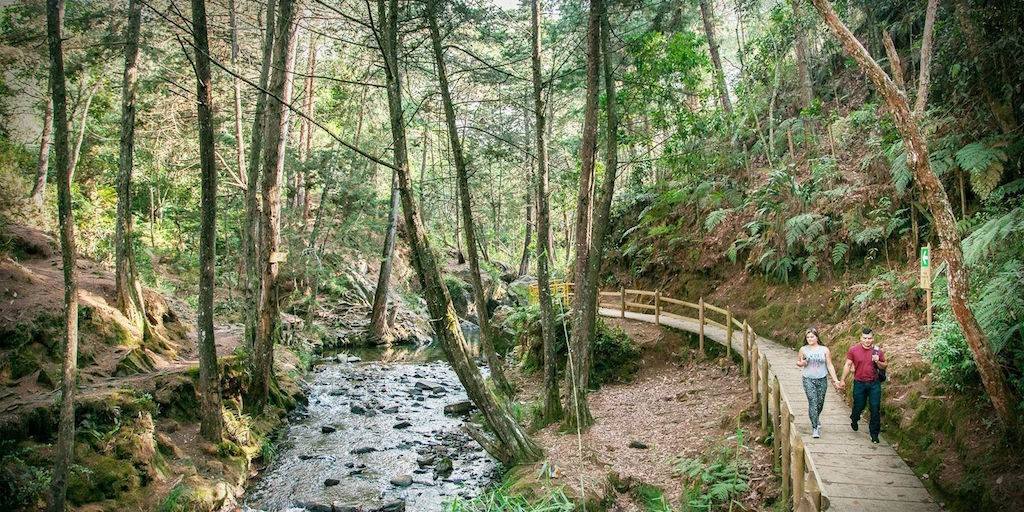 Inside the park, photo courtesy of Parque Arvi 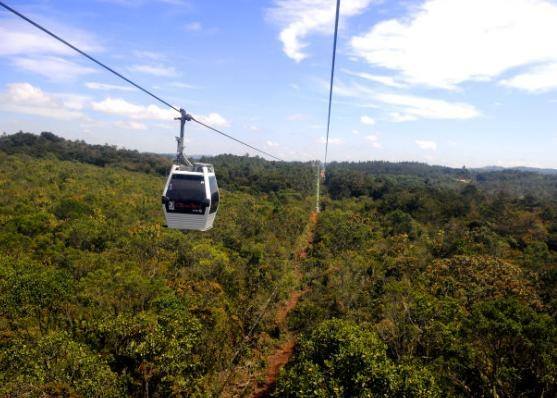 These are only some of the cool things you can do in Medellin, in addition to many other activities such as free walking tours of the city centre, visiting museums, lively soccer games in Estadio, and exploring the parque lleras area of El Poblado filled with boutique shops and restaurants.

Colombians are also very friendly people; my boyfriend loves chatting with cab drivers to practice his Spanish, and always leaves with a new friend by the end of the journey.

Colombia has made huge efforts in moving forward, and leaving its turbulent history behind. After my first five months living here, it has been clear to see that Colombia has an endless amount of people to meet, places to explore, and culture to dive in to, and it is all out there waiting for you to find. If you are ever interested in exploring South America, Colombia might just be the perfect place for your next big adventure. 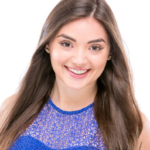 Alex Smiley is a recent marketing graduate living in Medellin, Colombia. Her passion for travel has taken her to 20+ countries, and she is currently working as an English teacher as she explores the rich cultures, history, and landscapes of South America. Born and raised in Ottawa, Canada, she was always involved in the arts, growing up dancing, playing piano, singing, and acting. During her undergrad, she completed a study abroad program in Nantes, France, and studied Spanish in Almeria, Spain. She speaks English, French, Spanish, and is currently learning Arabic, getting in touch with her Lebanese roots.